Sarah and I went to our concert last night and we had a fabulous time! Of course, Sarah wore her long dress, you know the one just like the ones the Celtic Woman wear. Many people stopped to say how beautiful she looked, just like a princess. We met another little girl there named Daria, who also had on a beautiful gown. Daria's mom took pictures of both the girls since they were so precious together. Our seats, thank you M. Coyne, were great. Sarah waved often, like after every song, and she got many winks and waves back!! Sarah loved every minute. She sat on my lap and was mesmerized by it all. She befriended the ladies next to her, asking what their favorite song was going to be and how she hoped they would get to hear it! She told them her fav was You Raise Me Up, which they saved for their last song, and Sarah joined right in! I love her outgoing nature. During intermission, Sarah looked at me and said, "I just love you Mem, thanks for taking me to this special show". Then she did some twirling in the aisle, just for something to do!! The Celtic Women... there were 4 singers and of course the violinist, who is extraordinary, did a beautiful job. We learned that one of their first shows was in Cleveland, 4 years ago, and they said it was were they got their start. They pretty much perform in the United States all the time now and live here. They sang a beautiful new song that honored America just for the fans here in Cleveland, to say Thank You. The audience loved them... many standing ovations. We also went up to the stage at intermission so that Sarah could get a really good look around. She wanted to get right up there and sing too.

On our way out of the Palace Theater we walked into the room with the STARS on the ceiling that twinkle like glitter and Sarah just had to stop and stare. We were out of the way of the crowd doing the mass exit and I just let her stop and stand there looking up. Sarah asked if she could lay on the floor and pretend she was laying in grass just looking at a starry night. I said of course... SO SHE DID!! People giggled and pointed, so wishing they could do the same thing! She was such a little lady the whole night long. I would take her again in a heart beat! 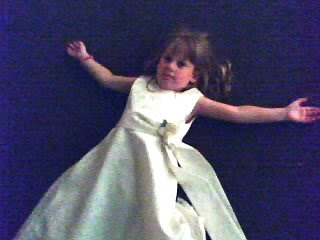 ~~Sarah...on the floor just looking at the STARS~~