Party At School and the first of my "Did You Know?" series! 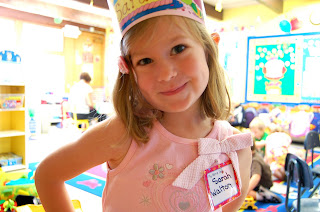 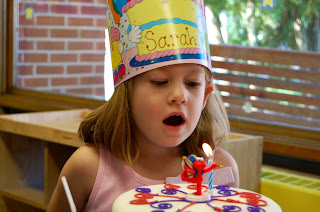 Can you tell this Meme just loves her??  Make your wish... Meme wants all your dreams to come true! * (UPDATE 7:14 p.m.) Sarah just informed me, as she looked at the above picture, what she wished for: "That me and Molly would always be friends and sisters!"

Hey Sarah, Molly and Cayden... Did You Know?...
I wanted to tell you a story about how Meme met Papa.  Meme was 18 years old and I was invited to the Lesjak cottage, at Holliday Lakes, with my friend Sally.  Sally was so excited for me to meet a friend of her boyfriend's, who name was Dave.  Guess what?  It was Papa!  I knew I liked him right away because he was so tall and so very cute!  Papa was so nice to me that day and we had a really fun time going on his boat to water ski and we played lots of volleyball.  We had a big campfire too!  Papa took my phone number and called me again in a few days to go out on a date.  We had a lot of fun together whenever we went out and soon enough ~ I knew I was in LOVE!  How will you know... (the song from Enchanted) ~ he loves you? ~ You just know!  We met on September 10, 1977.  We got engaged on October 3, 1978.  We got married on October 13, 1979.  We added the two dates together and got 13!  October 13th was also GG's and Great Grandpa's wedding day!  We got married on their 28th wedding anniversary and guess what, Cayden?  Your Mommy and Daddy got married on October 13th too~ on Meme and Papa's 28th wedding anniversary... that is some kind of magic, don't you think?  Meme was 21 and Papa was 22 years old.  Meme and Papa are about to celebrate our 30th wedding anniversary!  That is a BIG DEAL.  When you get married, its so important to remember that it is a FOREVER COMMITMENT to each other.  I am hoping for many more years with Papa because I still love him so, so, so, much!
Some pictures to share with you, my little gems... 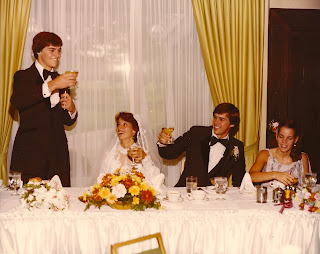 This is Uncle Mike giving a wedding toast to Meme & Papa.  Aunt Patty is next to Papa! 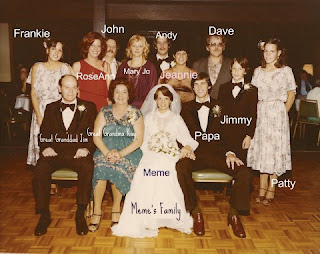 Meme and Papa, with Meme's family! 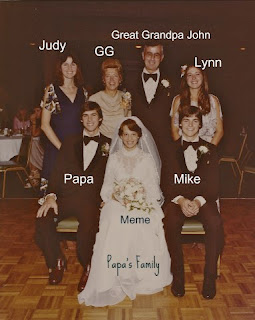 Meme and Papa, with Papa's family!
So... now you KNOW!