Dan was the child who would beg to play hockey. We said NO. We pushed baseball. When Dan was in 6th grade we gave in and let him play hockey. We signed him up at the rec, on a rec league. It was a "B" team. Dan was happy. We learned to love the game too. Dan was big and tall... and wasn't afraid to "check" anybody into the boards. He took hits well too!! He played left wing and sometimes center. When it came time for high school, Dan's obvious choice was St Ed's because they had the best hockey team and he so wanted to play for them. I remember sitting at try outs, with other parents, hearing about how their sons had been playing hockey since they were 4 ... and I admit, I was thinking how could Dan ever make the team? How would we console him if he didn't make this team. I would look at him on the ice and think... he is big... maybe that's to his advantage. Well, it was. Dan made that JV team his freshman year and he was Captain of the JV team his sophmore year. When number 16 made the Varsity team junior year, we were thrilled! Dan played for the St Edward Eagles for all 4 years. Proudly owns a State Champ ring, along with wonderful memories!
While I sat in the stands, I met one of the coaches' wife. Bridget T. had 4 little girls, girls who knew the game of hockey, girls who loved to come and cheer on the eagles. They knew players names and numbers. They knew stats on players. They amazed me. Bridget amazed me since she would often be coming from work, with 4 girls in tow, every game to watch and support her husband, coach T and his team. We became good friends. What can I say? I am drawn to kids... who doesn't know that? Soon the girls were getting to know Danny better. They had little crushes, I think, on this blue eyed, blonde high school boy. I once showed them a picture of Danny when he was 2 in a little red dress his sisters had put on him... and boy did that make an impression on them. They called him Danny Girl from that day forward.
Well Dan is 24 years old now. We haven't seen the T Girls in about 4 years. Last night they came for dinner. It was just like old times... just bigger girls. Allie is in the 10th grade, Annie in the 7th, Audra in 4th, and Abby in 2nd!! Dan is still Danny Girl to them. It was so fun to see them all again! Dan enjoyed some table hockey with Abby and Audra... I think Audra let Danny win!!! Sarah watched Uncle Dan, and gave him some advice! 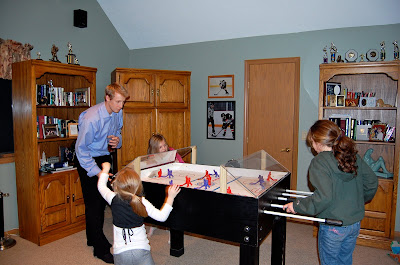 Abby getting a ride upstairs on Danny...Sarah close behind! 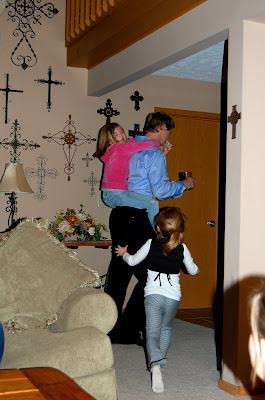 Sarah and Abby... talking about how to sneak up on Dan! 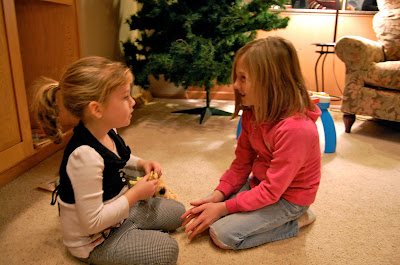 Annie and Allie playing some pool! Molly climbing on the chair! 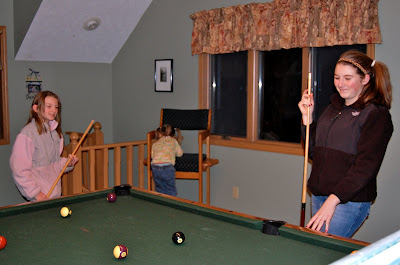 And all this fun because of a new wall mural at Winterhurst Rink, home ice of the St Edward Eagles. Bridget called me a couple of weeks ago to say they were looking at a picture Coach T. brought home when the girls screamed.... "Hey, That's Danny Girl!!" Sure enough, my very own #16 is front and center on the wall at the rink! I would recognize that skating technique anywhere... that and the one yellow lace!! Here is a scan of the picture Bridget gave me yesterday... I can't wait to see it myself in person. Thanks to the T's for the fun memories! Thanks to my Danny for making me one of those hockey Moms who yelled.... 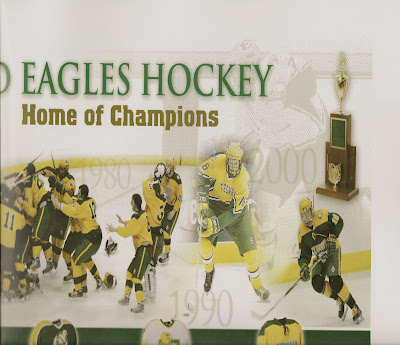